A data structure cannot be considered geospatial unless it is accompanied by coordinate reference system (CRS) information, in a format that geospatial applications can use to display and manipulate the data correctly. CRS information connects data to the Earth’s surface using a mathematical model. 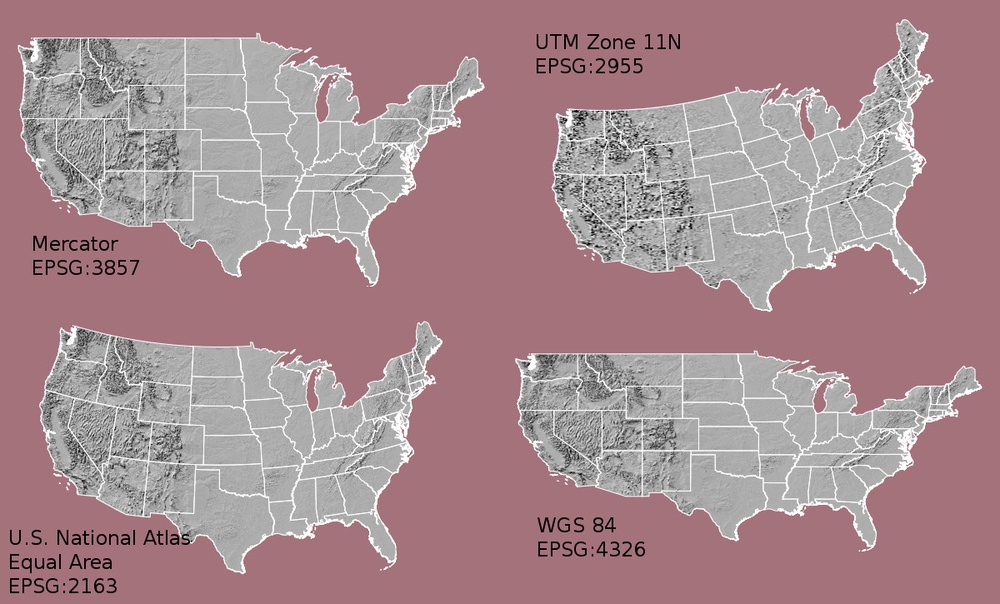 The above image shows maps of the United States in different projections. Notice the differences in shape associated with each projection. These differences are a direct result of the calculations used to flatten the data onto a 2-dimensional map. (Source: opennews.org)

There are lots of great resources that describe coordinate reference systems and projections in greater detail. For the purposes of this workshop, what is important to understand is that data from the same location but saved in different projections will not line up in any GIS or other program. Thus, it’s important when working with spatial data to identify the coordinate reference system applied to the data and retain it throughout data processing and analysis.

Components of a CRS

A common analogy employed to teach projections is the orange peel analogy. If you imagine that the earth is an orange, how you peel it and then flatten the peel is similar to how projections get made.

A projection is how you peel your orange and then flatten the peel.

Which projection should I use?

To decide if a projection is right for your data, answer these questions:

University of Colorado’s Map Projections and the Department of Geo-Information Processing has a good discussion of these aspects of projections. Online tools like Projection Wizard can also help you discover projections that might be a good fit for your data.

Take the time to figure identify a projection that is suited for your project. You don’t have to stick to the ones that are popular.

There are several common systems in use for storing and transmitting CRS information, as well as translating among different CRSs. These systems generally comply with ISO 19111. Common systems for describing CRSs include EPSG, PROJ, and OGC WKT. Most of the data we will be working with in this workshop use the PROJ system.

PROJ is an open-source library for storing, representing and transforming CRS information. PROJ.5 has been recently released, but PROJ.4 was in use for 25 years so you will still mostly see PROJ referred to as PROJ.4. PROJ represents CRS information as a text string of key-value pairs, which makes it easy to customise (and with a little practice, easy to read and interpret).

Note that the zone is unique to the UTM projection. Not all CRSs will have a zone.

Here is a PROJ4 string for one of the datasets we will use in this workshop:

Many existing file formats were invented by GIS software developers, often in a closed-source environment. This led to the large number of formats on offer today, and considerable problems transferring data between software environments. The Geospatial Data Abstraction Library (GDAL) is an open-source answer to this issue.

GDAL is a set of software tools that translate between almost any geospatial format in common use today (and some not so common ones). GDAL also contains tools for editing and manipulating both raster and vector files, including reprojecting data to different CRSs. GDAL can be used as a standalone command-line tool, or built in to other GIS software. Several open-source GIS programs use GDAL for all file import/export operations. We will be working with GDAL later in this workshop.

Spatial data is useless without metadata. Essential metadata includes the CRS information, but proper spatial metadata encompasses more than that. History and provenance of a dataset (how it was made), who is in charge of maintaining it, and appropriate (and inappropriate!) use cases should also be documented in metadata. This information should accompany a spatial dataset wherever it goes. In practice this can be difficult, as many spatial data formats don’t have a built-in place to hold this kind of information. Metadata often has to be stored in a companion file, and generated and maintained manually.