Background to the workshop and lessons learned

The UF R Users Group was formed in January 2017, and since then we’ve been running a weekly “UF R Meetup”: A two-hour session consists of a 30 to 60 minute presentation/tutorials followed by an “open lab” session. The meetup is meant to be a casual, informal opportunity to learn as a community, and seek face-to-face advice.

By the end of the second semester of running the meetup, we had identified a couple of issues:

In addition, our presentations on the basics of R were unstructured and constructed on-the-fly – not the best way to teach and learn R. We felt that these disconnects were making it difficult to establish a sustainable learning community.

In January 2018, we decided to run an introductory workshop series separate from the meetup. The workshop would provide structured lessons on the basics of R and allow the meetup to cover more advanced topics. Luckily for us, The Carpentries already have well-structured lessons for these materials, and we could rely on the strong pool of Carpentry instructors at the University of Florida.

The question then became: “Do we want to run a traditional two-day Carpentry workshop, or try something different?”. We already knew that there was interest in regular weekly meetings, and saw potential in giving access to people who could not commit to a full two-day Carpentries workshop, or people who might need a refresher even though they’ve taken the two-day workshop. So we decided to run our workshop a bit differently than normal.

We used the Data Carpentry in Ecology curriculum as a starting point. This included Data Analysis and Visualization in R, Data Organization in Spreadsheets, and Data Cleaning with OpenRefine. The two-day workshops usually include the Data Management in SQL lesson as well, but we felt it may have been to much for learners to learn all the SQL concepts in a two-hour session. Instead we opted to create some new material centered on the join features in dplyr, which has very similar concepts. This extended naturally from the dplyr lesson, and we even titled it “Advanced Dataframe Manipulation” to reflect that.

Besides that it was run exactly like any other Carpentry workshop. We had different instructors for each lesson, there were helpers available, we created an Etherpad for collaborative note-taking, and used red and green sticky notes for real time feedback. You can view the workshop homepage.

We’ve been a part of many Data Carpentry and Software Carpentry workshops here at the University of Florida, and this one went as well as any of them. Anonymous feedback at the end of each lesson was universally positive, and several participants told us in person how much they enjoyed it. 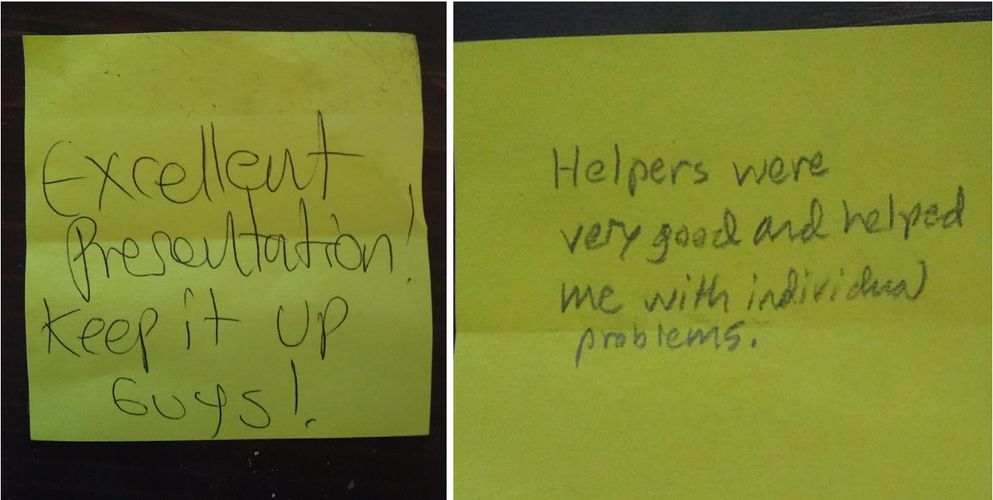 We capped the elongated workshop at 40 participants and it filled fairly quickly. However, at most only 18 came to a particular session and attendance dropped over the 7 weeks.

Several factors likely contributed to this attendance pattern. Attendance is also often low the first time a new training opportunity is offered. We also chose not to collect a registration fee, because our group is designed to be an informal alternative to other resources on our campus, including formal courses and traditional Carpentry workshops (on average there are about three Carpentry workshops each semester at UF). The lack of a financial commitment from students may have been part of the the depressed attendance. We also found that there was less interest and reduced attendance in the non-R focused lessons, as well as more interest in the tidyverse-based lessons compared to base R lessons. Scheduling conflicts also arose over the course of the series, and once someone had to miss a lesson there appeared to be a lack of motivation to continue.

Lastly, we were very interested in how this schedule format improved access. Anecdotally several participants told us how they preferred a two-hour-a-week workshop over a full two days. In a post-workshop survey, two of the three respondents said they preferred this schedule over a two-day workshop.

Scheduling-wise, the majority of material fit into the two-hour time slots. The exception was the “Manipulating Dataframes” lesson where we did not have time for the very last section. Luckily this fit in nicely with the “Advanced Dataframe Manipulation” lesson to fill the full two hours in week 6.

Overall, we feel this elongated workshop was a success and we hope to run similar ones in the future. We are encouraged by the post-survey responses, as well as the anecdotal comments from the attendees. The workshop series also provided a less time- and material-intensive opportunity for newly trained instructors to gain some teaching experience.

There a few things we may change: