Bringing Carpentries Training to the Federal Reserve Board

Bringing the Carpentries to the Federal Reserve Board staff

I ran Technical Training for the Federal Reserve Board for over 20 years, designing and implementing training programs tailored to the Fed’s specific needs to ensure staff had the computer skills necessary to do their jobs.

When I started bringing in the Carpentry workshops, research assistants (RAs), who come to the Board on two-year appointments to work with economists, were the intended audience, but permanent staff, notably technology analysts (TAs) and others in the research divisions who support the RAs and economists, also signed up for these workshops. The Board, and the Federal Reserve System as a whole, is definitely dealing with big data, and employs economists, technology analysts, and research assistants to turn collected and procured data into knowledge.

The Carpentry workshops worked well, but attendees mentioned they would like this training even more if it were tailored to the Board and economics research. I decided the best way to make this happen was to grow our own instructors. To do this, we first had to have enough permanent staff take one or both Carpentry workshops to build a pool of potential instructors, so over 2015 and 2016, we held a total of seven workshops, still primarily aimed at RAs, but with TAs and other interested staff encouraged to attend, too.

That done, in late 2016, Tracy Teal, Greg Wilson, Jonah Duckles and I had a conference call about instructor training and the event I had in mind. I also polled colleagues at the twelve Federal Reserve Banks, some of whom had been holding Carpentry workshops, too, to learn whether they might be interested in sending people to Washington DC to train for becoming Carpentry instructors.

Out of this came a week-long event – what I called ‘Week o’ Carpentry’ in my head – involving 18 people for the Instructor Training, nine from the Board and nine in total from four different FR Banks, six instructors, and a small number of new RAs and other permanent Board staff. Oh, and lots of food, too, including 21 pounds of tangerines. 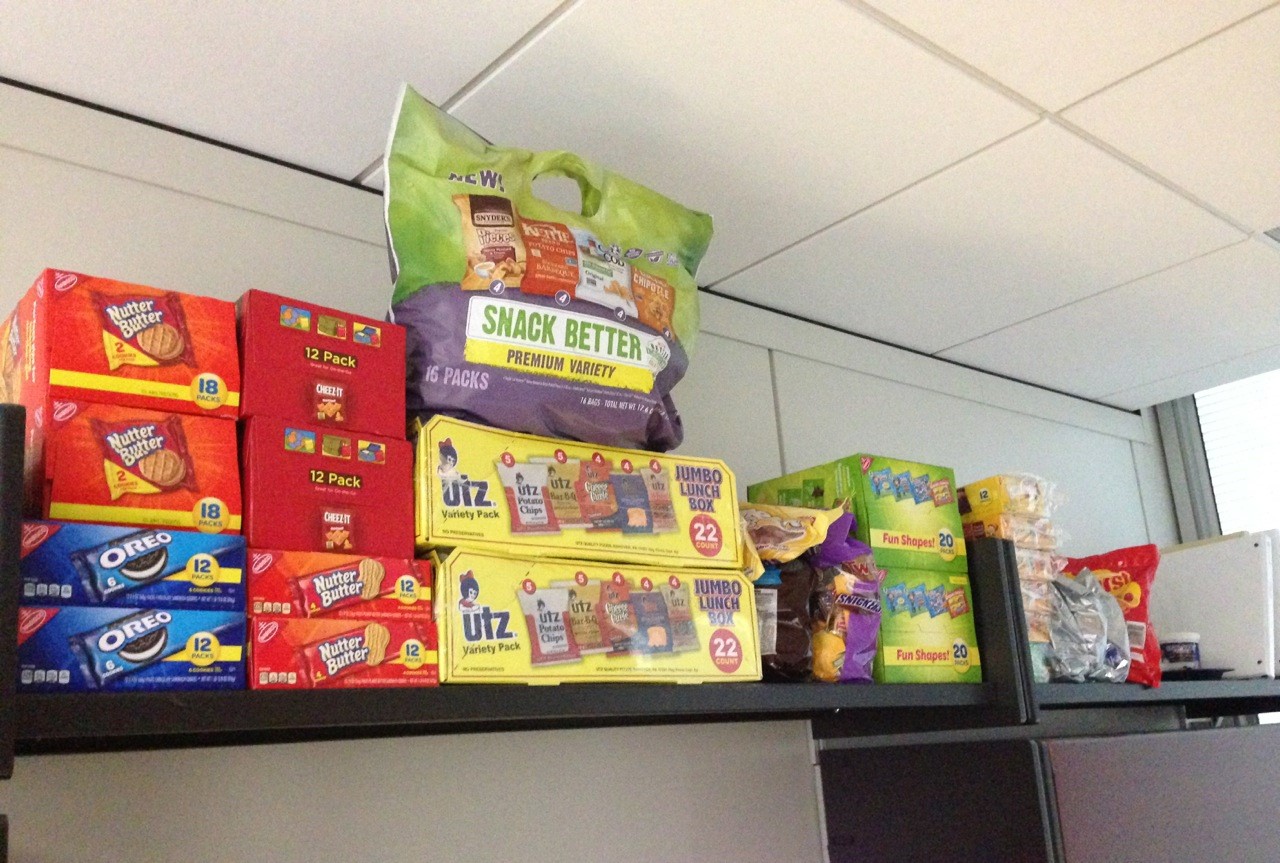 Wednesday: Discussion, exercises, and getting out of the classroom (this was suggested by Greg Wilson and discussed in the aforementioned conference call and further developed in consultation with others, particularly Varda Faghir Hagh.)

Though not a requirement of SWC/DC, I required participants for the Instructor Training to have taken a Carpentry workshop, though all of them were competent or experts with most, if not all, of the technologies being taught. Concurrent Data and Software Carpentry workshops on Monday and Tuesday made it possible for those who hadn’t yet attended a workshop to take one, gave others who had taken them the opportunity to serve as helpers and watch the workshop from the standpoint of becoming an instructor (‘fishbowling’), allowed those who’d taken only one workshop to take the other if they wanted, and ensured everyone attending the Instructor Training had exposure to the materials. Though most new RAs arrive during the summer, a few early arrivals attended these May 1-2 workshops, too.

One desire for this training was to build connections among the attendees; this extended even to the SWC/DC instructors. The four instructors, Jeffrey C. Oliver, Varda Faghir Hagh, Lachlan Deer, Easton White, and I met for dinner on Sunday night. It was great to break bread together, and was a good chance to ask and answer questions, talk about the coming week, the Federal Reserve, the reason for these particular workshops (tied as they were to the Instructor Training), and the participants’ overall knowledge level. Many of the Instructor Training participants already had a lot of technical knowledge; those new RAs attending SWC and DC workshops did not, however, and since they needed to master the content, the workshops had to be geared to and taught at their level.

The workshops on Monday and Tuesday were held in adjoining training rooms; the breaks, which occurred at approximately the same time in each workshop, were held in common space outside the classrooms. Having the food outside the classrooms encouraged people to leave the rooms, and by placing no seats in the common space, we encouraged people to move around. It also gave the instructors for the two workshops an opportunity to talk to one another and to participants in whichever workshop they were not teaching.

At the end of the workshop, we said good-bye to two of our excellent instructors, Jeff Oliver and Easton White; the other two instructors, Varda Faghir Hagh and Lachlan Deer, returned for most of the next day’s activities.

On Wednesday, the wall between the two classrooms was removed, and the 18 people taking instructor training all worked in the same room together for the first time for a very imaginatively titled session called From Software Carpentry/Data Carpentry Participant to Instructor. (Okay, so not so imaginatively titled …)

I wanted to try to build some cohesion among the participants, so to me, it was important that everyone actually learn everyone else’s name. Since it’s so easy not to do this, we did a call and response introduction both during the bridge day and in Instructor Training, For example, I stood up and said, ‘My name is …’ and the expected response from everyone else was ‘Alice’. This continued around the room; each time we did this during the latter part of the week, the responses got louder as more people remembered other people’s names, and by the end of the week, everyone really did know everyone else’s name.

We used Wednesday morning to talk about SWC and DC and how the materials might be adapted for the Federal Reserve and economics research. We also had two 45-minute ‘unconference’ sessions – the unconference idea was new to many – for breakout activities. We took ten minutes of the first 30 minutes of the day to have people suggest activities, writing them on Post-It notes (of course!) and then sticking them on a column in the room; one participant organized them for voting on later in the morning.

The breakout activities did not necessarily have to be discussion or working with others; we had Boomwhackers, singing tubes, and several card and board games available, too, and participants could also use the time to practice new skills from the previous two days on their own or with others.

After a tour of the main building and its Research Library, a walk next door to the National Academy of Sciences to visit the Einstein Memorial, and a heavy-duty recruiting job by class participants to get Varda to give up physics for economics (Lachlan, who is working on his PhD in econ, needed no such encouragement!), Lachlan and Varda left to see more of DC, and the rest of the group returned to the classroom to finish out the day preparing for Instructor Training by reading or reviewing materials and going over the certification tasks.

The Instructor Training was held on Thursday and Friday, and was taught by Karen Word. One feature of the workshop I particularly liked were the opportunities to work with one or two others during the exercises; Karen was excellent about moving people around and getting them talking to one another.

Several people at the Board team-teach an economics computing course at Howard University; the impetus for one or two of them to take Instructor Training was to learn more about teaching, as they had never had any formal training in how to teach. Now they have! Everyone found the instructor training useful.

After the Week o’ Carpentry

One of the bridge day activities was hashing out how to work on editing Data Carpentry materials to be even more meaningful to Federal Reserve staff and the economics community. To keep up the momentum, I scheduled a hack day (‘Technical Collaboration Workshop’ in Fedspeak) for late May, giving Board staff an opportunity to work on these materials, and I set up regular conference calls so the participants could talk about their progress on certification tasks.

I retired on August 1 to devote more time to the Astrophysics Source Code Library (ASCL). By that time, eight participants had already taught one or more sections of workshops held at the Board or at their Banks; three people, all from the Banks, had been certified, and two from the Board were scheduled to become certified in August and another in September.

The Board’s Technical Training is in excellent hands with my successor Rebecca Steffens. She has continued supporting SWC and DC training, and the Board now has five certified instructors running internal workshops tailored to the economics research of the Board.

And I feel like Yay! Carpentries Training Achievement unlocked (even though I’m no longer at the Board!)!