I’m a microbial ecologist that is primarily interested in understanding the ecological causes and consequences of plant-microbe interactions. Like many ecologists these days, my research spans the gamut from field to lab to laptop. Often the work involves collecting some leaves from plants in the field or from plants in a greenhouse, and then culturing from those leaves the fungi that live asymptomatically within them (a.k.a. endophytic fungi). Sometimes studying these communities relies on culturing the organisms in Petri dishes, and sometimes on directly extracting the DNA or RNA from the samples and sequencing that. One of the hardest things for me has been simply keeping track of what samples came from where, when, and who did what to which samples. To give an example: Let’s say I’ve got a fungal culture growing in a Petri dish, and I want to know how many times it has been subcultured (that is, regrown from an existing culture), when those subculturing events happened, what kind of plant tissue the original progenitor culture came from, and where that plant tissue itself came from out in the field. Oh and then downstream, I also want to know something about all the other such fungi that came out of that same plant and all their metadata as well. And I want to be able to get all of that programmatically.

Keeping track of this type of information is simple enough with dozens or even hundreds of samples. But with thousands, or even tens of thousands, it becomes untenable without a better system. So, as part of my postdoc, I invested some of my time in building a relational database to track all of this information for my own research projects. I had used SQL commands to query databases before for other projects, but I had never designed and implemented a database of my own. It seemed like building a small custom database would be a good solution to my problem and would help me develop a skill worth having.

The first part of designing a database is thinking long and hard about a schema (basically the blueprint for the database’s structure). While relational databases allow you to represent highly complex datasets and the connections between and within different types of data, they are not nearly as flexible as a simple spreadsheet. Once they are built, it’s not trivial (although definitely possible) to change their structure. This is why having a good long think on how you’d like to represent your data within the database is really important. I found the macOS program OmniGraffle really helpful for putting this diagram together, but any vector drawing program (or pen and paper) would work.

Here’s an example of a draft Entity Relationship Diagram I made to think about different types of data I work with in my research and their relationships: 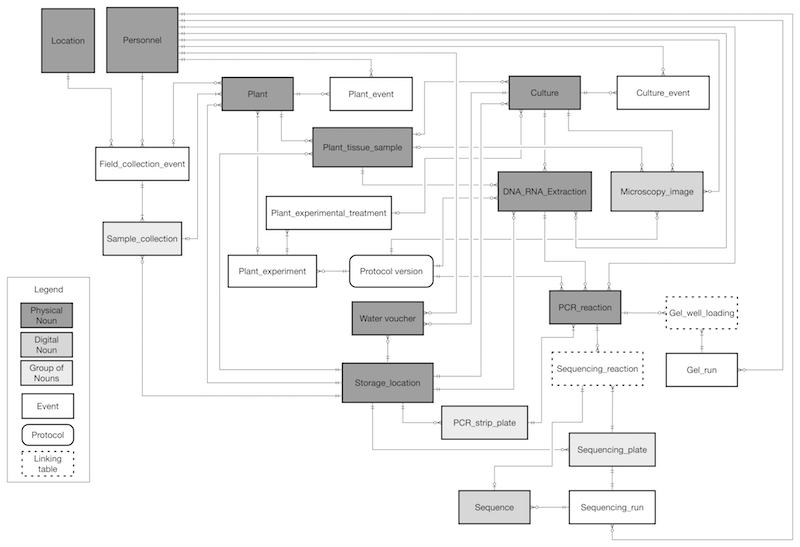 The first key step is to think about the different kinds of things you’d like to incorporate in the database. Each table in the database should represent only one type of thing, along with its associated metadata (see for example Figure 1 here). Not all tables have to be for tracking physical objects (e.g. plant samples, fungal cultures) though. One of the conventions I found useful was to have a table to track the events or actions that occurred to objects. So for example, there was one table for fungal cultures, and another for culture events. In the events table, I logged observations, subculturing events, DNA extraction events, and so on, and then each of these is linked back to one and only one culture in the culture table. The key advantage of this setup vs just adding these additional details to columns in a spreadsheet is that it allows for an arbitrarily large number of observations for any culture.

Once you decide on the tables, then you can think about what type of information goes within each table and the practical work of creating the primary and foreign keys that link them all together. A piece of advice: consider using UUIDs for your primary and foreign keys. Might be a little more complicated than using integers as unique identifiers, but are less likely to cause problems in the future. And then you can use grep across all your datasets because the IDs are globally unique. 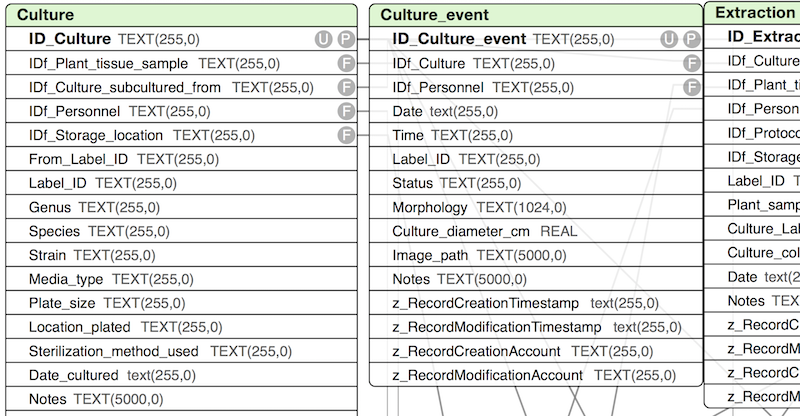 I started out by building a simple database using FileMaker Pro. I had used the software as an undergrad, and was attracted by the ability to use it to serve mobile-ready interfaces (in other words they had a free add-on iOS app). I read, and highly recommend the book FileMaker Training Series: Advanced for an accessible overview of how to think about designing relational databases even if you aren’t using FileMaker. In the end though, I decided not to keep using it, and transitioned everything over into a SQLite database. The primary rationale was that SQLite is non-proprietary, file-based (don’t need a server), and could easily be transitioned into a more complex relational database system (e.g. PostgreSQL) in the future if needed. Plus SQLite plays really nicely with R and Python, which made scripting custom interfaces much more straightforward, and as a bonus is used in Data Carpentry lessons. While I currently use the commercial Navicat software to ingest data into the database as I add to the spreadsheets that make up its tables, I am slowly working on developing a custom scripted interface to automate particular types of occurrence (returning from a field sample collection expedition, for example). In R, dplyr works directly with SQLite so you can write queries in native dplyr syntax. In Python, I’ve had good success with the sqlite3 library.

Things I wish I had known about designing a database (and about doing science):